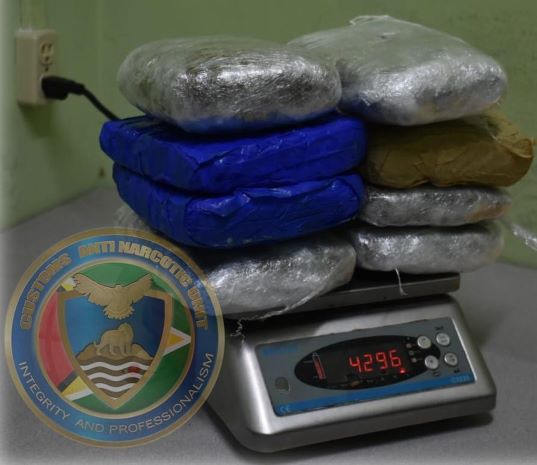 1 month ago·1 min read
ShareTweetPinShare
Home
Local News
3 arrested by CANU following the discovery of over 9 lbs of cannabis in Sophia
The content originally appeared on: INews Guyana

The narcotics found by CANU

Ranks of the Customs Anti-Narcotics Unit (CANU) on Friday arrested three males following the discovery of some 4.296 kilograms or 9.471 lbs of cannabis.

The narcotics were discovered in a car during an operation in Sophia, Greater Georgetown.

It was reported that CANU ranks were conducting an operation in the area when they carried out a search on a while Toyota Fielder wagon that was parked in front of a shop at ‘D’ Field Sophia. During this, they unearthed eight bulky parcels containing cannabis.

The driver of the vehicle, 31-year-old Roylon Adolph of 657 Industrial area, McKenzie, Linden and his lone passenger, 31-year-old Akeem Matheson a labourer of 169 Sin City, ‘B’ Field, Sophia were arrested along with the shop owner, Kacy Bowen.

The trio was taken to CANU Headquarters, where they were placed into custody pending
investigation.

Adolph is well known to the ranks of CANU since he has been charged for a matter of similar nature back in June, 2020.

Some 16 months ago, Adolph, who was employed at the Regional Democratic Council (RDC) of Region 10 (Upper Demerara-Berbice) as a driver, was on June 21, 2020 nabbed by Policemen with a large quantity of ganja on the Schoonord Public Road, West Bank Demerara (WBD).

According to police reports, about 16:30 hrs on that day ranks on mobile patrol
observed motor car PVV 3686 with the RDC 10 logo parked alongside another car bearing registration number PXX 6972 at the said location.

As the ranks approached the two vehicles, the RDC vehicle hurriedly pulled off in an effort to evade the officers but was pursued by the ranks who managed to intercept the RDC vehicle at a dead end of the road.