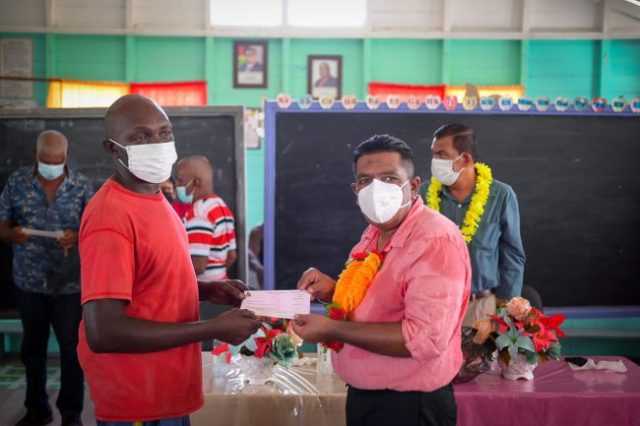 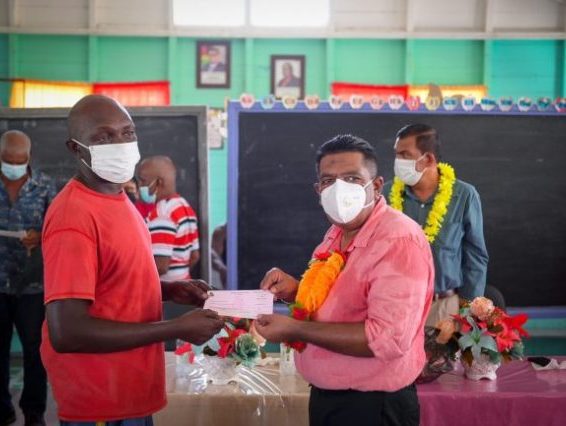 $2.5 B in flood relief grants distributed nationwide so far

Government, through the Ministry of Agriculture has thus far distributed $2.5 billion in flood relief cash grants to farmers nationwide, to help cushion the severe impacts of the May/June flood.

His Excellency, Dr. Mohammed Irfaan Ali announced in August that 52,000 households across 300 communities were affected by the unprecedented rainfall.

“The combined assistance to homestead farmers, kitchen gardens and households for these categories will be in excess of $3.5 billion,” the President had stated.

Over $600 million has been disbursed to farmers across the Pomeroon-Supenaam (Region Two) district with over 3000 farmers benefitting.

Rice, cash crops and livestock farmers of Leguan and Wakenaam, Region Three, received a total of $67.1 million. In the same region, another $22.6 million was distributed to farmers in the riverine communities of Bonasika, Aliki and Lanaballi.

Minister of Local Government and Regional Development, Nigel Dharamlall, MP hands over cheque to a farmer

In Demerara- Mahaica (Region Four) cash grants were given to farmers at St. Cuthbert’s Mission, Laluni, Swan village and several areas in the Demerara River.

Farmers from Mahaica- Berbice (Region Five) and East Berbice- Corentyne (Region Six) were among the first to benefit from the government’s assistance.

More than 5000 flood affected farmers in Region Five received $1 billion in flood relief grants, while close to $1 billion was also disbursed to farmers at Auchlyne, Lesbeholden, Yakusari, Johanna and Mibicuri in Region Six.

Additionally, some 600 farmers in Region Ten, who were also affected by the flooding benefitted from the government’s flood relief grant. It is estimated that over $75 million will be distributed under the agriculture grant there.

The government has set aside $7.6 billion to support farmers who suffered losses from the recent flooding.

Cane harvester was crushed to death on a private farm – GuySuCo

Minister, Zulfikar Mustapha said the government will continue to address the needs of its citizens, noting that everyone who suffered losses will receive assistance from the PPP/C Administration.

In cases where affected persons’ names are not on the list of beneficiaries, the minister said those issues will be addressed. Officials from the various agencies will return to ensure the process is smoothly managed.

Farmers who cultivate cash crop, and other large-scale agriculturists will receive $100,000. Those who lost household appliances, and whose their kitchen gardens were affected will get $50,000.