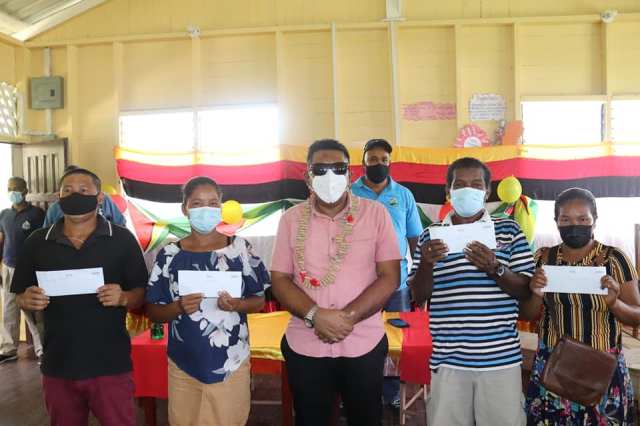 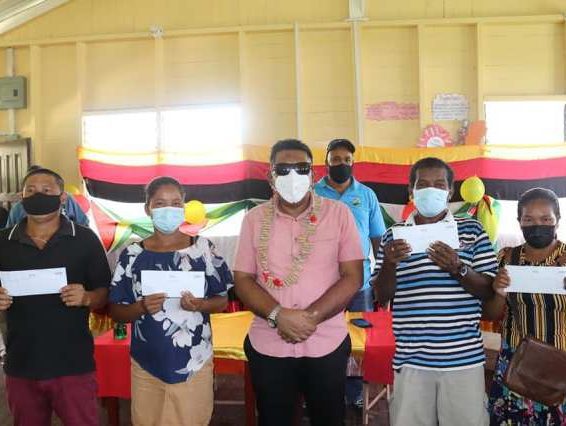 Approximately $127 million in flood-relief grants will be distributed to farmers from several
villages in Region One (Barima-Waini) who were affected by flooding earlier in the year.

Agriculture Minister Zulfikar Mustapha, Local Government and Regional Development Minister Nigel Dharamlall, and Housing and Water Minister Collin Croal are currently on a two-day visit to the Region to wrap up distribution in the remaining villages that were affected by flooding during the extended May-June rainy season.

Minister Mustapha, who spearheaded distribution in the villages of Yarakita, Kamwatta, and
White Water urged farmers to use the monies to go back to the land as soon as possible.

“We are here today to deliver on a promise made by His Excellency, President Dr. Mohamed
Irfaan Ali. During the flood, the President and other members of his Cabinet visited all of the flooded areas and saw firsthand the devastation that was taking place. The agriculture sector was one of the most affected sectors. The President made a commitment that, after the flood, the government would give some form of assistance to those who were affected. When we make commitments, we work tirelessly to deliver on those commitments,” the Agriculture Minister said.

Farmers from Arakaka, Matthew’s Ridge, and Baramita have already benefited from the
ongoing exercise when distribution commenced in the region earlier this month.

At the end of the exercise livestock and cash-crop farmers will each benefit from at least
$50,000 in relief grants as the government moves ahead with the exercise.

Farmers who benefited from the exercise expressed heartfelt thanks to the government for the relief and committed to using the monies to return to the land.

Rosalinda Joseph, a cash-crop farmer from White Water Village while reflecting on her losses said that she will use the money to return to the land.

“I lost a lot of cassava, ginger and other cash crops like tomatoes and so on. I will use the
money to buy seeds and fertilizers to put back on my farm. I want to thank the President and the government for this help because the flood really affect us,” the farmer said.

To date, farmers and other persons from Regions One, Two, Three, Four, Five, Six, Nine, and 10 who suffered losses as a result of the flood have benefited from relief from the
government.