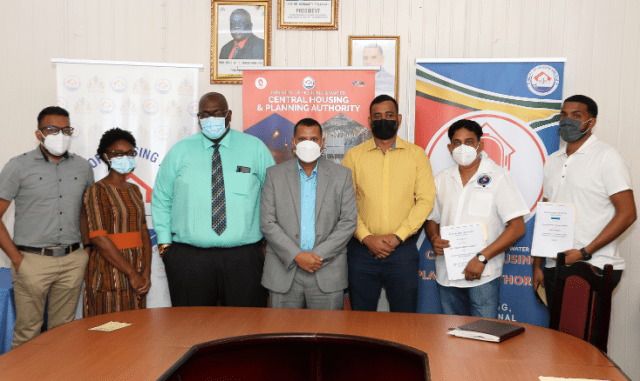 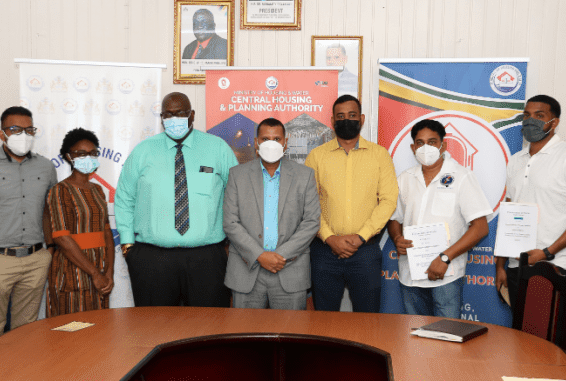 The Ministry of Housing and Water through the Central Housing and Planning Authority (CH&PA) has inked approximately $136 million in contracts under the Adequate Housing and Urban Accessibility Programme (AHUAP) for the construction of core homes in Sophia, Georgetown and the installation of street lights at La Parfaite Harmonie, West Bank Demerara.

The contracts were signed at CH&PA’s boardroom on Monday, in the presence of Minister of Housing and Water, Collin Croal, Permanent Secretary, Mr. Andre Ally, Chief Executive Officer of CH&PA, Mr. Sherwyn Greaves and Director of Projects, Mr. Omar Narine.

Minister Croal, in his charge to the contractors, explained that these projects are important, particularly for the enhancement of low-income and vulnerable communities and families, as he urged them to complete the works to the best standards.

“There are persons who are waiting to benefit from this programme, those persons have been identified already and so I want to urge you to follow all the guidelines, ensure that you engage our technical staff if you are having difficulties, and to ensure that we have a timely delivery of this project,” the Minister said.

Minister Croal also expressed contentment at the pace of the AHUAP, noting that over the past year more than $6oo million has been invested in Sophia for infrastructure upgrades, the construction of a multipurpose facility, and the disbursement of home improvement subsidies. Approximately $1 billion in contracts have also been signed for similar projects in La Parfaite Harmonie. As the agency continues to push the programme, he also noted that capacity building will be ongoing for the Community Development Department – Special Projects Unit, which has oversight of AHUAP.

Giving a breakdown of the contracts signed on Monday, Permanent Secretary, Mr. Andre Ally, further explained that twenty-five (25) core homes will be constructed in Sophia under the Construction of Core Homes contract, which was awarded to AJM Enterprise. This contract consists of five lots, with five houses on each lot, at a value of $111,882,800 ($22,376,560 each lot).

Moreover, the contract for the Supply and Installation of Solar Integrated LED Street Lights at La Parfaite Harmonie, West Bank Demerara was awarded to N. Balgobin & Sons Contracting Services for two lots. Lot One is valued $12,671,360, while Lot Two is $12,530,000.

AHUAP is an Inter-American Development Bank (IDB) funded programme, aimed at improving the quality of life in urban and peri-urban Georgetown through better access to adequate housing and basic infrastructure for low-income populations, and through improved accessibility and mobility services.